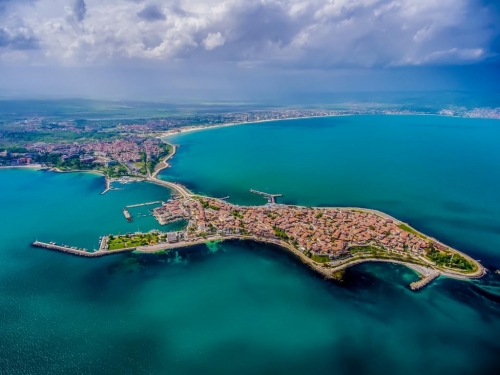 More than 32 centuries ago, the ancient Thracians inhabited the small peninsula, connected by a narrow isthmus to the mainland. Nessebar is established, one of the most ancient towns in Europe.

The advantages of this piece of land protected by the waves and the rocky shore are indisputable. The small fishmen village began its journey through the millennia with the name given to it by the Thracians - Menabria.

There is discussion about the etymology of the name. It is indisputable that "bria" means "city"(town). It is disputed about Mena - whether this comes from the name of the founder of the settlement known as Mena or Melsa, or if it is in some way related to the word "mena" (exchange, trade). When we talk about Nessebar, definitely both assumptions sound logical. In next centuries, the town became an important commercial centre and one of the first in Europe to mint its own coins.

Several centuries after the first inhabitants, around the 6th century BC. a Hellenic colony Messebria, was founded. The rapid development of the town begins. The presence of ports located in the small bays pushes trade forward. Massive fortress walls were built. Some remains modified later are still in place today. Quarters with dwellings and craft workshops were formed in the fortress. Temples, a theater, a place for training athletes, a school were built. III – II century BC is the apogee in the development of Mesembria.

The very location of the city is a prerequisite for traces of these small civilizations to exist and be accessible to history buffs. Make time during your vacation to explore them. There is regular transport from Sunny Beach and Ravda. Both places are within walking distance of Nessebar for the person accustomed to the big city.

Several decades BC. the Romans conquered the city and turned it into an important commercial and cultural center on the Black Sea coast. The new name is Mesembria. Beautiful basilicas are being built in the city, the fortress walls are being strengthened, the city sewerage and thermal baths are being built.

According to historians, Nessebar became a Bulgarian city for the first time in 705. This happened by agreement of Tervel and Justinian. The city became the main trade gate of Bulgaria to the world. The loss later felt especially strong to him. In 812, Krum captured Mesembria and restored the city's role in the country's economy.

For the first time the name Nessebar, considered Slavic, appeared with Tsar Simeon. It flourished under Ivan Alexander. During these centuries Nessebar continued its role as an important trade and cultural center.

In 1453 it fell within the Ottoman Empire and remained alive with a new rise during the Renaissance.

The current romantic and inspiring look and artistic atmosphere dates back to that time. They attract tourists, Bulgarians and foreigners, and remain incredible memories.

If you want to immerse yourself in the charm of this eternal city, at your disposal are rooms for rent, guest houses and beautiful hotels in Nessebar.
Nessebar festivals: The cultural traditions of Bulgaria