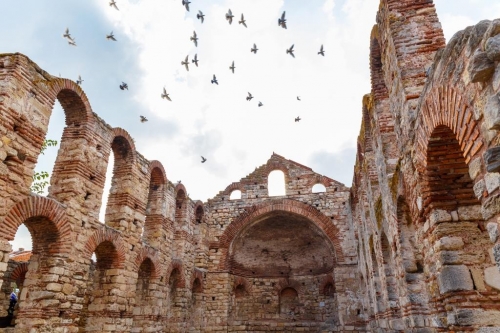 Nessebar - eternal as the sea. It was formed more than 3,200 years ago on a small peninsula, separated from the mainland by a narrow isthmus. The town is among the oldest live in Europe. Many nations have passed through here. Every great civilization has left its mark. Nevertheless, the place has retained its appearance and romantic spirit. The old town of Nessebar is included in the List of World Heritage Sites.

The official website of the Bulgarian Orthodox Church defines Nessebar as an "encyclopedia" of The Christian church architecture.

Traces of 44 churches have been found on the current territory of Old Nessebar. They were built in the period from V to XIX century. It is commented that Nessebar was an island additionally connected to the mainland by  an isthmus. It is supposed that the territory of Nessebar was 3 times larger in area. It means that the temples were more than 100.

Many of the churches are well preserved and with unique architecture. The people of Nessebar appreciate this wealth given by the History. Here are the oldest in Bulgaria early Christian basilicas.
The Church of the Holy Archangels Michael and Gabriel The Church of Sant John the Baptist, Nessebar The Church of the Holy Saviour (St Spas) Saint Stephen Church (The New Metropolis) Saint John Aliturgetos Church Holy Mother of God Eleusa Church