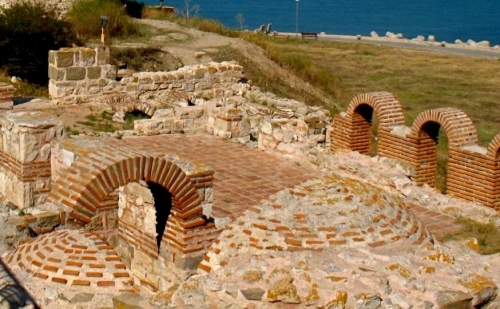 Holy Mother of God Eleusa is a late antique orthodox church, situated in Nessebar. The church’s name is dedicated to Blessed Virgin Mary with the name Eleusa, meaning “the Tender” in Greek. It was constructed in the 6th century. It’s supposed, that it is the oldest church on the territory of Nessebar. According to historical chronicles, it was part of a monastery complex in the 14th century.

The architecture of the Holy Mother of God Eleusa is a three-nave basilica with three apses and a narthex. It is built with numerous white stones and red bricks. In the past, this church was larger, but due to the collapse of the beach, the northern and central parts of the building were lost. There are five tombs preserved in the narthex, but they have been looted. The Holy Mother of God Eleusa is mentioned in several deeds of Tsar Ivan Alexander (1331-1371). Today, the basilica is preserved and partially restored.