The Church of the Holy Archangels Michael and Gabriel 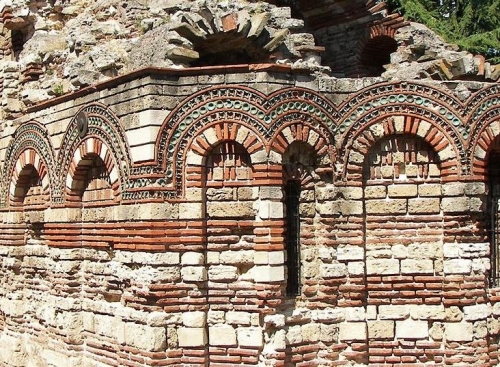 The Church of the Holy Archangels Michael and Gabriel is a medieval Eastern Orthodox Church, situated in Nessebar. It is part of the Architectural and Historical Reserve in the city. The temple was built in the 13th century. The church has been restored, but not completely. It is part of a future project in Nessebar for the preservation of cultural and architectural monuments.

The architecture of the church is single-nave and cross-domed with a narthex. To the east, the church ends with three multi-walled apses. Its exterior decoration is remarkable, with arches accentuated by rows of green bowls. Below them are checkered stone blocks and red bricks.

The church can be entered through three doors, two to the narthex and one on the north wall. To the west there was a tower that rose above the porch, with a hidden stone staircase leading to it.